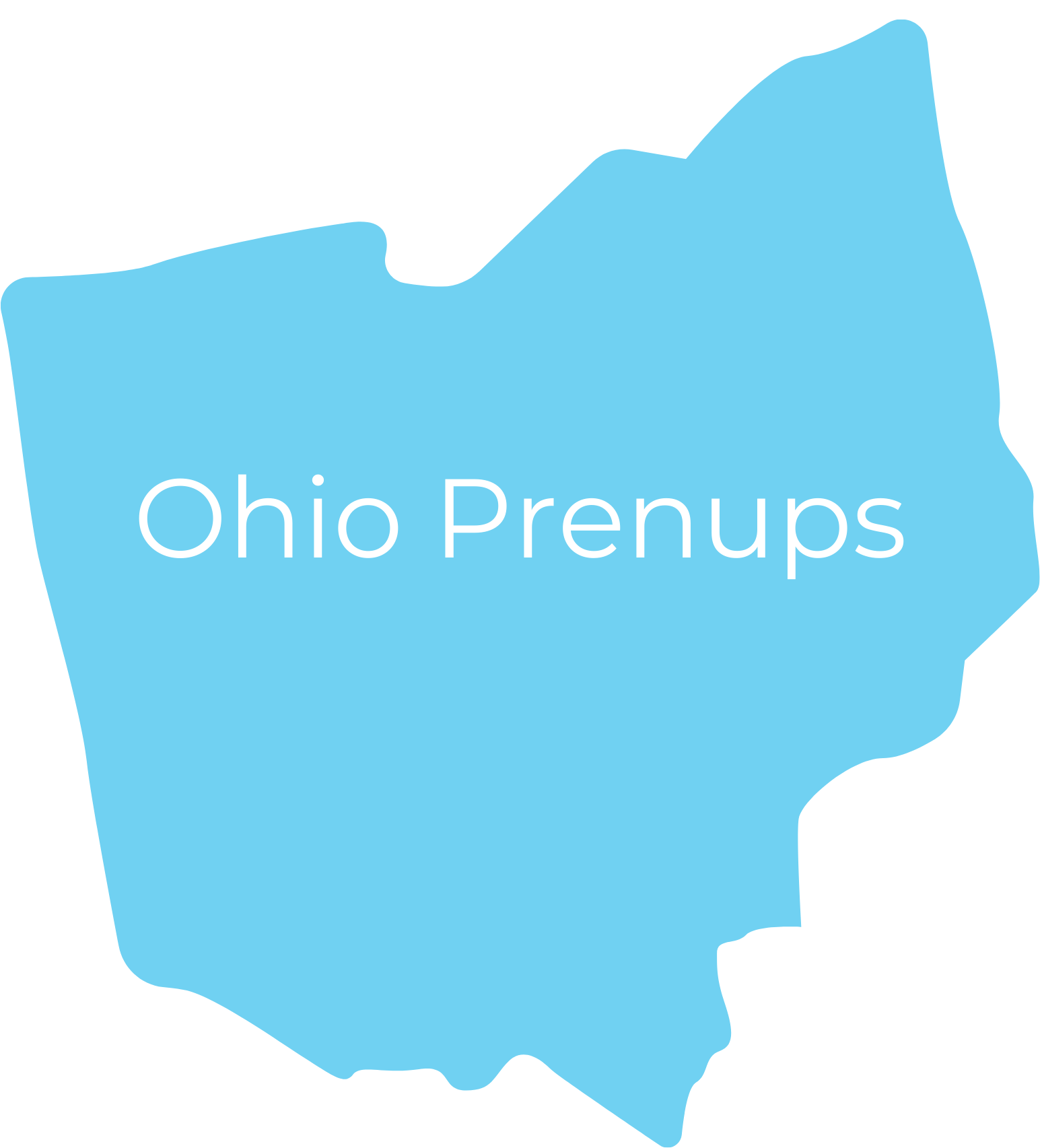 Did you know that the Buckeye State is the home of the roller coaster capital of the world? (Hey, Cedar Point!). Well, in anticipation of all the ups, downs, twists, and turns that marriage can throw at you, we’ve compiled some useful information (and a few hacks!) to help you make your prenup rock solid. Let’s jump in!

Prenuptial agreements (also called antenuptial agreements in Ohio) are contracts that are entered into by couples who intend to marry. While the agreement is prepared before the marriage, it springs to life as soon as the marriage is finalized. In Ohio, there are no codified laws that govern prenuptial agreements. So, where can you look for guidance when creating your prenup? Well, the courts in Ohio have stepped in to lay out the requirements for creating a valid and enforceable prenup. Big picture, your prenup can detail which property you and your spouse would like to be considered marital or non-marital property and how you would like this property to be divided in the event of divorce. Alimony is another common subject addressed in prenuptial agreements. Importantly, you cannot contract to child support or custody. These are issues that are ultimately decided by the court.

For your prenup to be valid in Ohio, you need to comply with the following requirements:

What makes a prenuptial agreement unconscionable? This can happen when there are changed circumstances in the standard of living during the marriage, changes in employability, severe health conditions, ect. In these cases, the court may determine that based on the change in circumstances, it would be difficult for one spouse to return to the standard of living established during the marriage. Vanderbilt v. Vanderbilt, 2014 Ohio 3652 (Ohio Ct. App. 2014).

What to include in a valid Ohio Prenup

In order for your prenup to be valid and enforceable, you need to meet the following requirements:

What to exclude from your Ohio prenup

The following cannot be included in your prenup…

The origins of Ohio prenups

Did you know that prenups have been used in Ohio dating back to 1846? Interestingly, in those times, prenups were created in contemplation of a spouse’s death versus divorce. The agreements were considered to promote “domestic tranquility”. They preserved a spouse’s interest in the deceased spouse’s estate and made the process of death much smoother.

Fast forward 140 years to the case of Gross v. Gross, 11 Ohio St.3d 99 (1984). It was in this case that the Ohio Supreme Court first evaluated the validity of a prenuptial agreement in the context of divorce proceedings. The agreements were finally determined to promote healthy, successful marriages versus encouraging divorce. In reaching this conclusion, the court considered the increase in the number of divorces and the fact that many people were entering into their second marriages with children and significant wealth acquired during the first marriage. So, whether created in contemplation of divorce or death, prenuptial agreements are considered valid in Ohio (as long as they meet all of the other requirements!).

Let’s take a closer look at the Gross case! First, the Court set forth three requirements for valid and enforceable antenuptial agreements:

Regarding enforcement of these agreements during divorce, the court determined that not only may they be enforced, but they may be enforced by an at-fault party as long as the agreement itself isn’t prohibitive.

The court also held that while courts cannot alter prenuptial provisions pertaining to property division, they can modify alimony provisions in the event that the amount of alimony is insufficient or “unconscionable” at the time of divorce due to changes in circumstances.

Finally, the court will not enforce outrageous provisions. (For example, requiring a spouse to maintain a certain weight). In fact, these “outrageous” provisions can discredit the entire prenup.

The official term for property not considered part of the marital estate is separate property. This includes property:

Prior to marrying, the Vanderbilt couple had a long term relationship. During that time the wife worked a solid job and owned a modest home which she shared with her soon-to-be husband. Prior to the wedding, the couple designed and built their dream home. While the husband was much wealthier than the wife, she continued working during the marriage. However, the husband’s income definitely provided a higher standard of living for the couple.

Sadly, the couple divorced years down the road. Prior to marriage, they entered into a prenuptial agreement in which they both waived their right to spousal support. However, during the divorce proceedings, the wife challenged the spousal support provision as unconscionable based on the change of financial circumstances and heightened standard of living experienced during the marriage. She argued that a return to her former standard of living would be a hardship. Ultimately, the court disagreed. While the wife’s standard of living changed during the relationship, much of this occurred prior to the marriage (ex. building the dream home before wedding). As a result, the wife should have anticipated the standard of living change at the time she entered into the agreement. In order for a spousal support provision to be unconscionable, the party can’t have been able to contemplate the change of circumstances at the time they entered into the agreement. Unfortunately, the wife was out of luck.

Cohabitating couples should keep this in mind when executing their prenuptial agreements!

How to end a marriage in Ohio

There are four options for spouses who want to end their marriage: divorce, dissolution, legal separation, and annulment.

While they may commonly be used interchangeably, in Ohio, the terms mean different things.

Dissolution of Marriage.  This is a proceeding where the spouses both agree to end their marriage. This requires both parties to be in agreement as to all terms of the dissolution. If they are in agreement, they can jointly request dissolution and don’t need to prove or establish any grounds to end the marriage.

We’ll dive a little deeper into divorce below. While you may never need to use this information, understanding how divorce/dissolution works will help you while drafting your prenup.

Ohio divorce based on fault.

In order to obtain a divorce (end your marriage) in Ohio, you must provide a valid reason for seeking divorce. The following are the available grounds in a fault-based divorce:

An annulment is a form of separation where it is as if the marriage never occurred. There are six grounds for an annulment:

In Ohio, you or your spouse must have been a resident of Ohio for at least six months prior to filing for divorce or dissolution.