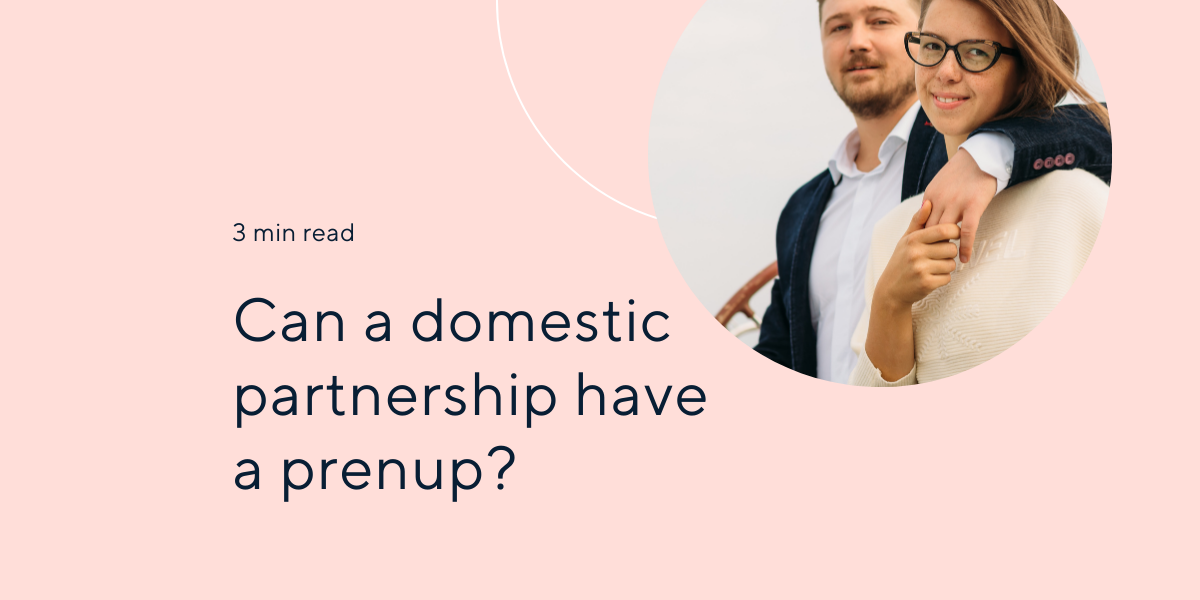 Can a Domestic Partnership have a Prenup?

The number of unmarried couples living together in the United States is rising fast. About 7% of the adult population lives together, unmarried, which equals about 17 million people. Not all of these people are in domestic partnerships because only a handful of states even recognize domestic partnerships. The trend toward more unmarried, cohabiting couples is possibly due to multiple factors: financial reasons, commitment issues, being against marriage as an institution, societal acceptance of unmarried partners, and more. Whatever the reason is, it’s on the rise, as it’s nearly tripled in the past few decades.

What is a domestic partnership?

Can a domestic partnership have a prenup?

Alternative to prenups for domestic partnerships

Cohabitation agreements are not recognized in some states. Among the states that do allow cohabitation agreements, they vary in requirements. For example, some states may allow a verbal contract while others may not. Other states may or may not enforce the financial support of an ex-partner, sometimes referred to as palimony (compared to alimony for ex-married couples, which is enforceable in all states).

If one of the partners in a cohabitation agreement is to die, they may not have the same rights as married couples do in this situation. This is why having a will is important in the case of unmarried couples (and married couples, too!).

Another major difference between the two types of contracts is that cohabitation agreements may not be enforceable in some states, whereas valid prenups are enforceable in all states.

Palimony, a play on the words “pal” and “alimony,” is the financial support from one ex-partner to the other. Palimony may sometimes be included in a cohabitation agreement, depending on the state. Palimony is determined on a state-by-state basis, as not all states will enforce palimony in a cohabitation agreement. This term, palimony, was coined after a famous California Supreme Court case known as Marvin vs. Marvin, in which a court declared that “palimony” was appropriate between an unmarried, opposite-sex couple that lived together (the wife took care of the home while the husband worked). And even though there wasn’t a written contract in place at all, the court still said the wife was entitled to financial support. Prior to this case, most states did not enforce or recognize the relationship between cohabiting partners. After this case, it became much more common for courts to enforce agreements between unmarried, cohabiting partners.

HelloPrenup can help you with all of your prenuptial agreement needs. To learn more about how it works, click here.

Nicole Sheehey is HelloPrenup’s Head of Content. She is an Illinois-licensed attorney. You can read more about us here. Questions? Reach out to Nicole directly at [email protected]

Nicole Sheehey is the Head of Content at HelloPrenup, an Illinois-licensed attorney. She has a wealth of knowledge and experience when it comes to prenuptial agreements. Nicole has Juris Doctor from the pretigeous John Marshall Law School. She has worked as an attorney for several years, specializing in family law matters. She has a deep understanding of the legal and financial implications of prenuptial agreements, and is well-versed in the nuances of the law. Nicole is passionate about providing couples with the best possible advice and guidance when it comes to prenuptial agreements. She is committed to helping couples make informed decisions about their futures. Nicole is always available to answer questions about prenuptial agreements, whether via email at [email protected] or in person.