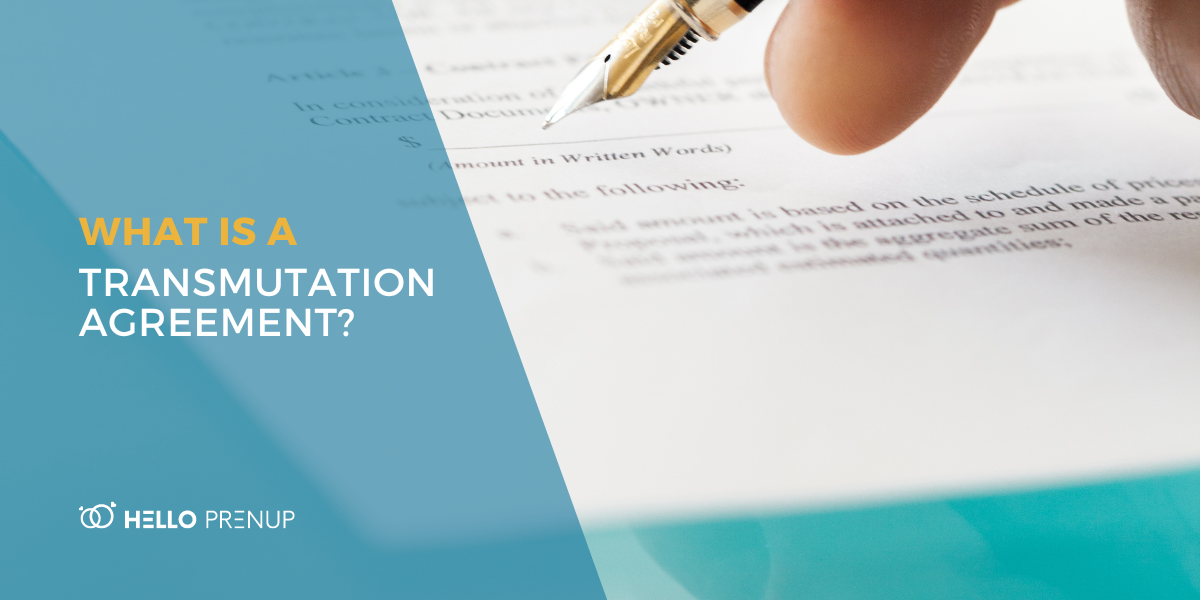 What is a Transmutation Agreement?

Did you know that when you wed (without a prenup), generally, all property obtained from that point on is jointly owned by you and your spouse? Hence the phrase, “what’s mine is yours.” If that sends a shiver down your spine, don’t worry! You’re not totally out of the driver’s seat. Enter the transmutation agreement. This type of postnuptial agreement allows you to change the designation of property during your marriage. *Collective sigh of relief* Stay tuned for all the details!

Why are transmutation agreements important? Well, to understand why transmutation agreements are important, you need to understand how default state laws typically work with regard to property division. When you marry, you become a partnership in the eyes of the law. That means, generally, any property obtained by you or your spouse during the marriage is considered joint marital/community property. That would be the case even if one spouse did not contribute a single penny to the purchase. The same thing goes for debt acquired during the marriage. Because the property is considered jointly owned, depending on the state you live in, upon divorce, it will be split with your spouse. Anything considered marital/community property is generally divided between spouses in a divorce, absent any marital agreements. Not surprisingly, many couples aren’t thrilled by the prospect of having to split EVERYTHING, hence the use of prenuptial agreements and transmutation agreements.

For example, let’s say you inherit a farmhouse from your grandfather. Inheritances are typically treated as separate/non-marital property. Let’s say your spouse decides to contribute money to the renovations of the farmhouse. This could be considered commingling (i.e., the combining of assets to the extent that the law now views it as joint property). In this situation, you may want to have a transmutation agreement to protect the farmhouse from being commingled or to provide reimbursement to the contributing spouse. Typically, transmutation agreements target specific property, as opposed to prenups and postnups, which typically target all of your assets, property, and liabilities. For example, a home that is separately owned could be the subject of a transmutation agreement in order to change the designation to marital property.

Why you should consider a transmutation agreement

Lack of a prenup

There are several reasons to consider a transmutation agreement, including a lack of a prenup. As we highlighted above, once you wed without a prenup, any property you obtain during the marriage is also your spouse’s (absent exceptions like inheritances and gifts, in most states). Perhaps you are ok with that for the most part, but there are a few items you want to protect. This is a great reason to have a transmutation agreement.

You want to gift your spouse an asset

Here is another example. Perhaps the wife owns a home prior to marriage. After the couple wed, they decide to make wife’s house their marital home where they will raise their children. Wife wants the home to belong to both spouses, so they enter into a transmutation agreement in which they both agree that the wife’s separately owned home will become marital/community property and will now be owned by both of them.

These agreements can also be helpful for couples with children from a previous marriage. For example, perhaps you purchased your childhood home during the marriage and want to ensure that it remains solely yours so you can hand it down to your own children. In that instance, you could create a transmutation agreement where your spouse agrees that the childhood home is your separate property. This is an important note, your spouse must agree to the change in designation of the property because by entering into the agreement, one spouse is waiving their right to their interest in that property. In this scenario, there may be certain property that each spouse wants to keep separate to ensure that it passes down to their children. However, if the property was purchased during their new marriage (without a prenup), it will likely be considered the joint property of the couple. That means that if the couple divorced, the property would likely be split between them, and the children would get less of the property. While there is still a chance that you could be awarded certain property in a divorce – especially if you live in an equitable distribution state – there are no guarantees. A transmutation agreement allows the couple to transmute the property from marital to separate/non-marital to ensure that it is not up for grabs in a divorce.

The differences between prenups and transmutation agreements are similar. A prenup must be entered into prior to marriage, and a transmutation agreement is entered into after marriage which makes sense, right? Before you are married, you can’t transmute your property from separate to marital property. That can only be done after marriage. The same goes for the other direction. Before marriage, you have no marital/community property, so you can’t change the designation to separate/non-marital property.

Remember, transmutation can occur without an agreement. However, if you do want to solidify the characterization of your property with an agreement, it’s a good idea to do so. Similar to prenups and postnups, transmutation agreements usually must be in writing and signed by both parties. Additionally, the agreement needs to be voluntary. That means one spouse cannot exert undue pressure or coercion in order to bring about the signing. If that happens, the enforceability of your agreement can likely be challenged, and ultimately the whole agreement could be thrown out.