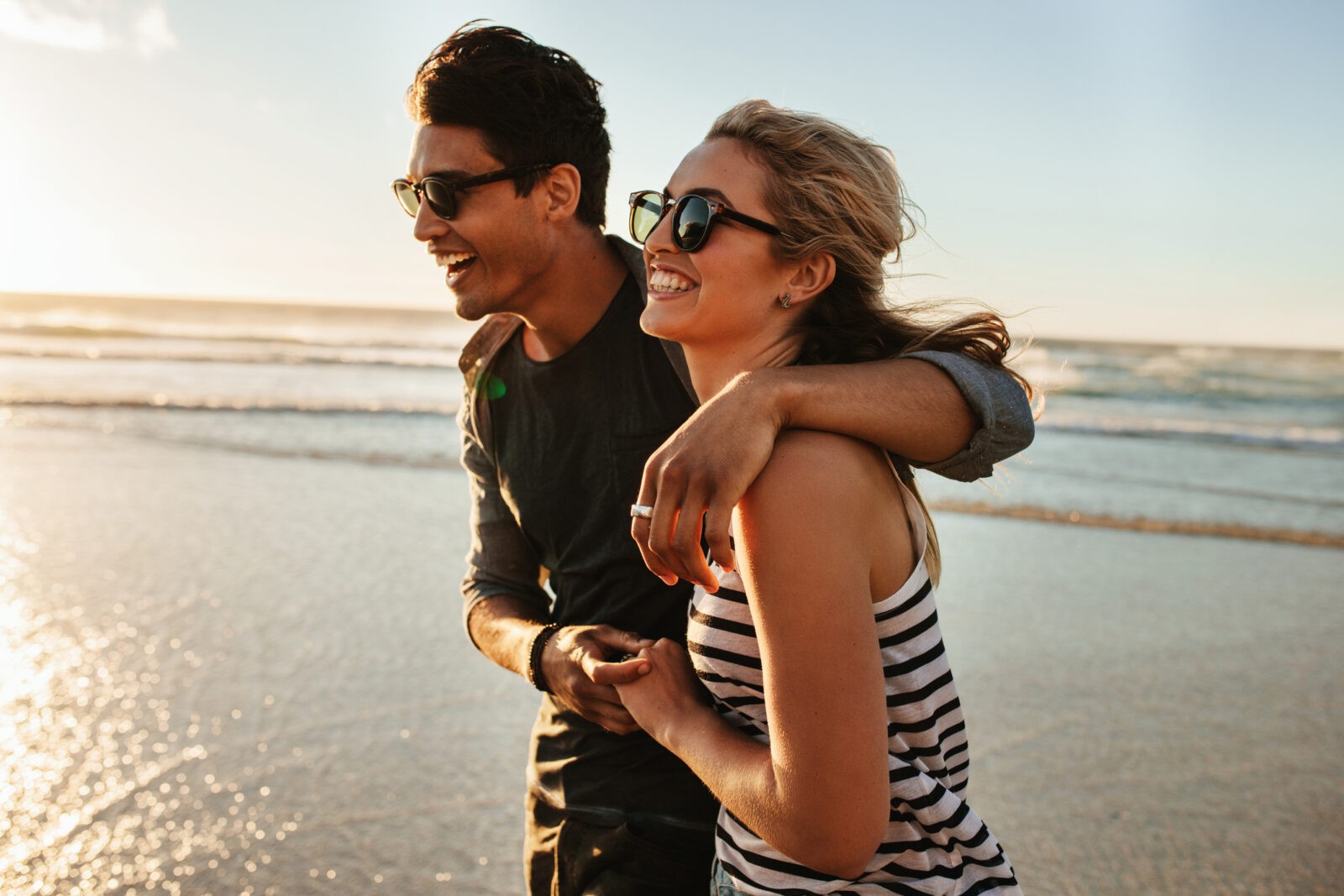 Prenups are the new life insurance!

In 2019, there were 2,015,603 marriages in the United States. That’s A LOT of wedding cake! That same year, there were 746,971 divorces (in 45 reporting states, including Washington, D.C.). That’s a lot of paperwork and headache. Even amicable divorces can still be emotionally and mentally draining. Let’s look at some of the divorce rates specific to different states and regions.

Divorces occur all over the country. Nevada, Arkansas, Oklahoma, and Idaho are the states with the highest divorce rates. States in the south and the midwest typically have higher divorce rates than other regions. About half of marriages end in divorce, something that all couples should consider.

In this article, I’ll discuss which states and regions of the U.S. have higher divorce rates, how this data may impact divorce laws where you live, and why all couples should consider planning for the unexpected as they begin their new lives together.

According to the American Psychological Association (APA), more than 90% of people in western cultures get married before they turn 50. Unfortunately, 40-50% of marriages end in divorce, with second and third marriages having even higher divorce rates.

Official statistics report divorce rates, which is the number of divorces per 1,000 people. For about the past 20 years, the marriage rate in the United States has pretty steadily declined. In 2019, the marriage rate was 6.1, compared to 8.2 in the year 2000.

As a result, divorce rates have also dropped over time. However, the ratio has continued to hover around 40-50%. The divorce rate in 2019 was 2.7 (about 44%), while in 2000 the divorce rate was 4.0 (49%). So, even though the rates have seemingly declined, close to half of marriages are still typically ending in divorce.

What Does this Trend in Divorce Rates Mean?

More people are getting married and having children later in life. The result of this shift would logically mean that people are more financially stable, mature, and more “ready” to wed by the time they say “I do.” You may think that this would lead to fewer divorces, but this has not been the case.

The actual result of this trend has led to a shift in our culture as it relates to divorce, especially for women. It’s becoming more and more common for women to have to pay spousal support to their exes if they’ve been the bigger earners during the marriage.

The divorce rates of a particular state or region can have an impact on how the courts typically handle divorce cases. It can also influence the availability of good divorce attorneys, or the types of laws that a state puts into place. Marriages and divorces are handled by each individual state, so legal requirements can vary greatly.

States With the Highest Divorce Rates

These are the states with the highest divorce rates as of 2019, measured per 1,000 of population.

States with  the Lowest Divorce Rates:

This map (below) also illustrates the states with the most divorcees at age 30, with the dark red states having the highest rates. Looking at this image, you can see that divorce is a widespread issue with concentrations across the south and midwest.

No One Gets Married Expecting Divorce

Even though the prevalence of divorce has remained steady even with the decline in overall marriages, no one thinks that they will end up being part of this statistic.

Get this: only 11% of couples think that their marriage has a chance of ending in divorce, and only 5% of couples actually have a prenup in place when they divorce.

In a national survey, it was discovered that 1 in 4 spouses had thought about divorce in the last 6 months. I’ll be honest, this statistic even made me think for a second. (I mean, I have a fairy tale romance, but has my spouse been one of those 25% of married people who thought about divorce??). 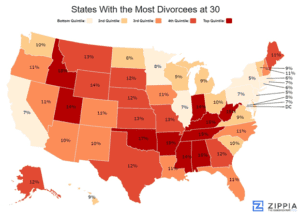 Prenups are the new Life Insurance

Like I said, no one goes into a marriage planning on divorce, but the reality is that a significant number of spouses are actively thinking about it, and half of couples do decide to end their marriage.

This is no different than how no one plans to die anytime soon, but they still purchase life insurance policies so that they know in the unfortunate event of their death, their affairs will be in order.

Prenups are not just for celebrities or the 1% anymore. A prenuptial agreement is just that – an agreement that lays out the conditions of the marriage in the event of divorce or death.

A prenup will ensure that both parties of the marriage are protected – not just the one who decides to bring up the “P” word. Think of it as just another one of those uncomfortable conversations that all couples have to work through – just like finances, how you’re going to raise your kids, who’s going to stay home, religion, values, where you’re going first for the holidays, and so on.

There are nine community property states in the U.S.:

Community property brings up questions like: what happens to your retirement investments that you acquire during the time that you’re married? Will you have to sell your home and split the cash, or can one of you keep the house?

A prenup answers all of those questions for you in a way that you and your future spouse decide to be fair, rather than the courts deciding for you.

As a side note, some of the states with divorce rates higher than the U.S. national average are included in that list of community property states.

Even if you live in a high-divorce area, it doesn’t mean that your marriage is doomed. In fact, I have a little secret for you: research has shown that couples who elect for a prenup actually have stronger marriages!

Of course, there’s no single reason that couples decide to split, money and communication are two of the most commonly cited reasons for those “irreconcilable differences.” Getting those sticky conversations out of the way before you even tie the knot opens up lines of communication like you’d never imagined.

Talking about past debt and future finances ensures that you and your future spouse are on the same page about some of the issues that turn out to be marriage killers. Plus, if you can navigate those landmines, you can probably get through anything. Even fighting about what to binge watch next on Netflix.

A prenuptial agreement can be uncomfortable to bring up, but you should remember that it protects both spouses. Many times, when people are going through a divorce, they become different people.

All too often, spouses think “he would never do that to me,” or “she wouldn’t do anything to hurt me,” but everything changes when the divorce is being settled – especially once the lawyers get involved.

A prenuptial agreement lays out the decisions that you made together, as a couple, during a time when you cared deeply about one another and had each others’ interests at heart. During the midst of a divorce, people do things out of anger and resentment – things that they would never normally do.

When you consider the prenup from the perspective of protecting your relationship, even after the marriage has ended, it really is a no-brainer, especially if you have kids involved.

HelloPrenup is the platform for the 21st century couple. You’re not having your parents’ wedding, so you shouldn’t have your parents’ lifestyle planning techniques, either. Just like your mom’s puffed-up bangs from your childhood photos, the days of not talking about the future in realistic terms is a thing of the past.

Prenups have increased by 500% over the last 20 years, and that’s a statistic that you want to be a part of. Start your marriage off with a strong foundation, and protect everything that you and your future life partner have been working for, and will continue to work for, as long as you both shall live.