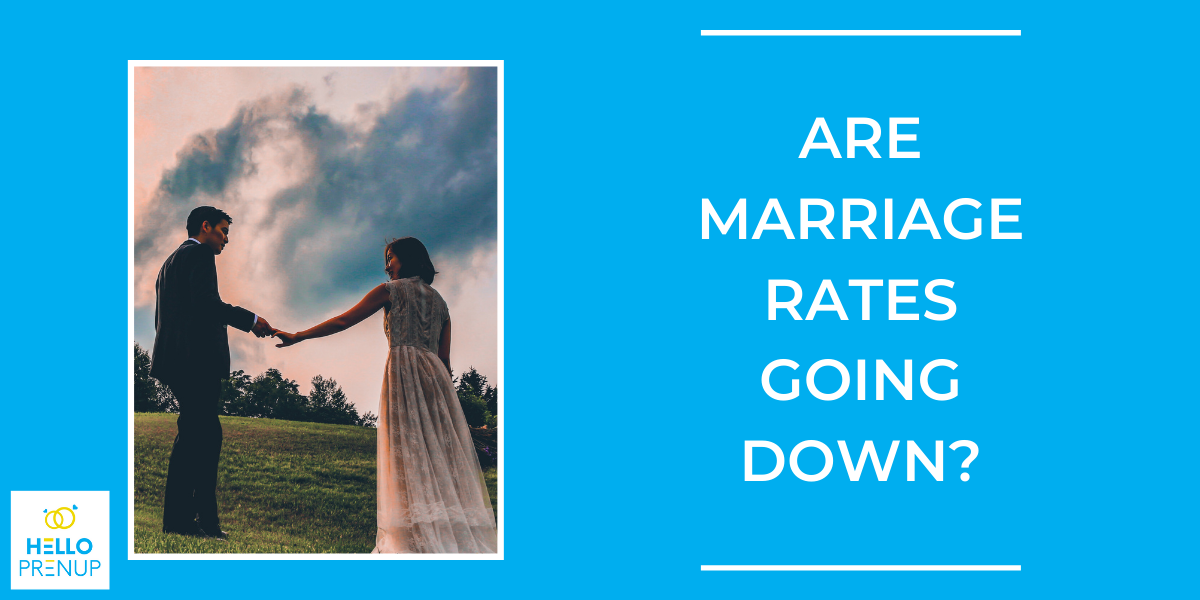 Are Marriage Rates Going Down?

If you’ve followed marriage trends, you’ll know that the number of “I do’s” in America is declining. Headlines blame everything from millennials to the middle class, but what’s really going on?

By 2019, the number of unmarried/never-married individuals had grown to 33%. Similarly, adults ages 25 to 54 who were married made up only around 53% of the population. The survey of Americans showed that 38% were not married or living with a partner (which is called cohabitation, but more on that later!).

In 2018, marriage rates reached a record low, which might lead us think about the slow change of our societal structure and the economy based on married, family households.

There’s lots of benefits to marriage. Of course, it’s pretty great to get to live with your significant other and show off that sparkly ring that practically shouts “I’m taken by the love of my life!”, but there’s measurable benefits too. For example, couples usually have a better choice of health insurance plans and can choose from each person’s employer’s offerings.

You can argue that a marriage license shouldn’t have the power to bestow these benefits, but unfortunately, gold old ‘Merica doesn’t always see it that way. Married people usually receive more benefits when it comes to taxes, fees, and cost of living. Single people can have to pay “loner tax” (not a real tax but the name given to additional costs) to the tune of 1 million dollars over the course of their unmarried lifetime for taxes, healthcare, and more. Which shows that there definitely are incentives to marriage, other than spending your life with your best friend!

But! Cohabitation is On the Rise

Not everyone gets married these days, but that doesn’t mean there aren’t relationships. Since the downfall of “I do,” there has been a rise in cohabitation. Cohabitation is when a couple in a relationship lives together without being married. Which has been pretty common among early-twenty-something’s.

In the past two decades, the number of unmarried couples living together almost tripled to 18 million cohabitating couples! Research also found that age is just a number because cohabitating couples were anywhere from over 65 and older to as young as their early twenties.

Sometimes living together is a step toward the end goal of marriage. At the same time, in other cases, cohabitation is the end game. Young people that choose to live together instead of marrying cite a variety of things, from avoiding a marriage that your not 100% about yet to not being able to handle different financial views.

Instead of tying the knot right away, some couples prefer to take married life for a test drive. One poll found that millennials perceive marriage as a risk that could end in a costly divorce, causing them to wed later or not at all, choosing instead to live and do life with their partner sans marriage certificate.

Thankfully prenups can help ease couples minds about the potential costs of a divorce and as society shifts away from the stigmas around prenups that prenups are only for the rich (which couldn’t be further from the truth!) only time will tell if marriage rates stay decreasing.

Whatever the reason for skipping the chapel, the fear of fallout, either emotionally or financially, is real and driving more and more couples to enjoy life together without signing on the dotted line. We’re shedding a tear for marriage!

What About the Singles?

Still, some individuals are happily living the single life. Maybe they were married, maybe not, but either way, marriage or cohabitation aren’t in their future. The term “unpartnered” applies to about 36% of women and 39% of men in the 25 to 54 age group. As you may have guessed, it’s mostly working-age adults in their prime. Probably because even though we all want to cuddle on the couch with someone, having a relationship takes a backseat to working to earn enough money to survive!

Just because marriage rates are at an all-time low doesn’t mean love is dead. Today, people are expressing their love for each other in multiple ways!

A snapshot of love poll by Cosmopolitan found that 71% of singles are more interested in long-term relationships than pre-pandemic. However, out of those taking the survey, 18% say they’ve been in love with more than one person simultaneously, and 22% aren’t sure about monogamy.

It seems we’re all searching for love instead of just “the one,” and everybody is just figuring it out as they go along. Nevertheless, you can’t argue that marriage has serious benefits; and the American system dolling out those rewards to married couples doesn’t seem likely to change anytime soon. Plus, when you can protect yourself from financial fallout by getting a prenup, you can confidently say “I do” knowing you have that extra piece of marriage insurance while jump starting a conversation about your future with your partner.